On Bloomberg [Amazon Seller Caught in the Middle of Trade War] 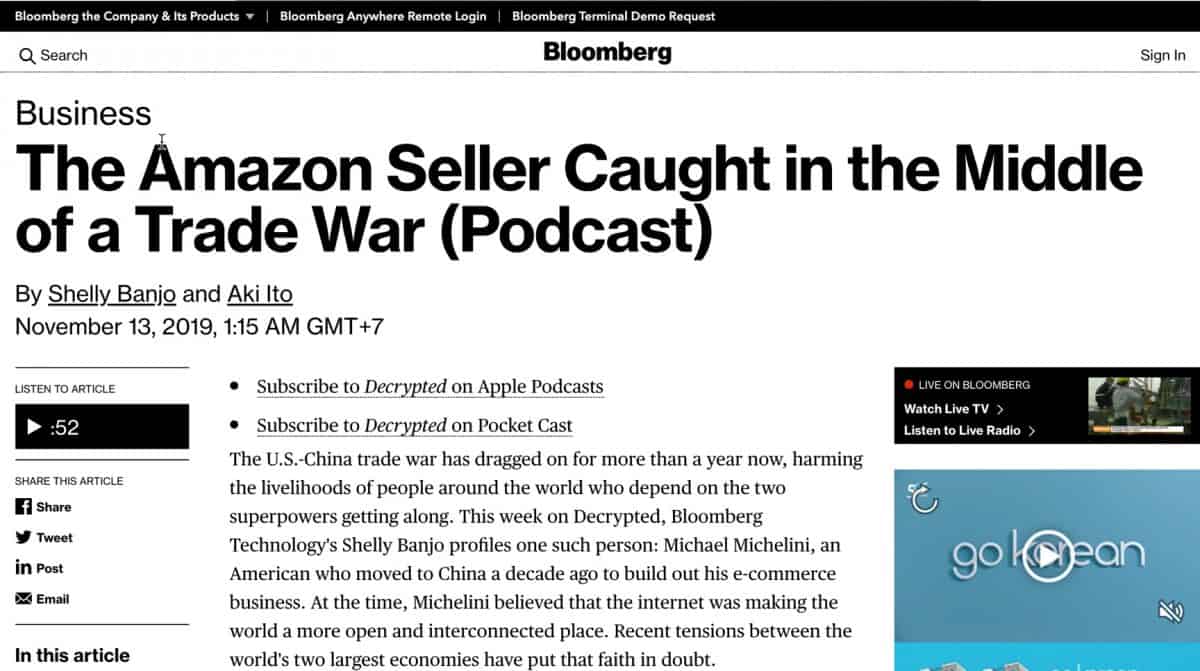 Definitely have a listen to this podcast – Shelly did a lot of work over the past few months following this and making it a 23 minute podcast.

Shelly Banjo did an amazing job following the story and said it best on her twitter:

The US-China trade war is complicated. I wanted to understand the real HUMAN impact. So I found a guy stuck smack in the middle of it to share his story for the Bloomberg Decrypted podcast. Please give it a listen here: https://bloomberg.com/news/articles/2019-11-12/the-amazon-seller-caught-in-the-middle-of-a-trade-war via
@business
The Amazon Seller Caught in the Middle of a Trade War (Podcast)
The U.S.-China trade war has dragged on for more than a year now, harming the livelihoods of people around the world who depend on the two superpowers getting along. This week on Decrypted, Bloomberg…
bloomberg.com
6:58 AM · Nov 13, 2019·Twitter Web App

@sbanjo
I first met Michael @michelini back in August, where I interviewed him for this article about Amazon merchants feeling the pain of the trade war: Amazon’s Merchants Are Feeling the Pain of a Trade War With China
Raising prices to offset the cost of tariffs could hurt sales, and if the standoff worsens, Amazon also could be affected.
Shelly Banjo
@sbanjo

Michael is an American who moved to China to pursue e-commerce. He makes Italian-style espresso coffee pots in China and sells them to American consumers via Amazon.
Shelly Banjo
@sbanjo

The trade war has taken a toll on his business– and has really changed his entire life.
Shelly Banjo
@sbanjo

So during each twist and turn of the trade war, I called Michael to see what he thought. We started recording our conversations. We spent hours on the phone, and in our HK radio studio, when he was in town for trade shows and other events. I spoke to his family in Florida.
Shelly Banjo
@sbanjo

“It’s sad to me. With internet and technology there’s a huge opportunity for people from all different parts of the world to work with each other, but it just seems like it’s going backwards. I thought it would be more open. But govts are just trying to put walls up” – @michelini

@VultHk Replying to @sbanjo
Trump should deal with trade deal first. Otherwise, China make use of Hong Kong situation as hostages and chips for bargain

“It’s sad to me. With internet and technology there’s a huge opportunity for people from all different parts of the world to work with each other, but it just seems like it’s going backwards. I thought it would be more open. But governments are just trying to put walls up”MIchael Michelini